If there is that's great. If not would anybody be interested in a Who'verse bigbang? where all series/books/audios etc of Doctor Who, Torchwood, Sarah Jane Adventures, the Big Finish audios would be okay. (In the way that TARDIS bigbang used to be - site not active now for about 4 years)

totally4ryo
Rating: PG-13
Word Count: 33865
Characters/Pairings:  Jack Harkness/Ianto Jones, Gwen Cooper/Rhys Williams, John Dixon/Elena Plowright, Ianto Jones/Lisa Hallett (Past); Ianto Jones, Jack Harkness, Gwen Cooper, Rhys Williams, Owen Harper, Toshiko Sato, John Dixon, Elena Plowright, Paul Prior, Tim, Alexis Castle, Richard Castle, Tenth Doctor, Martha Jones, The Master
Warnings: Language, Violence
Spoilers: Up thru "End of Days" and "Last of the Time Lords".  None really for the Tomorrow People or Castle (pre-series)
Author's Note: This is a sequel to my story, Contagion, and some knowledge of that story is necessary to read this.  This is also pre-series Castle, so there are no other characters from that show here except for Alexis and her rather famous Dad.  A big "thank you" to the_silver_sun for the artwork, it's fantastic!


Summary: When the Tomorrow People are incapacitated by a mysterious, low-level telepathic field, Torchwood investigates.  Evidence leads them to Magister Innovations, the Archangel Network...and the last of the Time Lord.

The second classic Torchwood big bang has now finished. So a big thank you to all of you, whether you took part as a writer, an artist, a beta or a reader, none of this would work without you.

Writers, if you haven't yet done so feel free to cross post your story to whatever comms or sites you like.


I will put up a masterlist post of all stories later today.


And hopefully, if there's still interesting in it, I'll see you in September for sign ups for Classic Torchwood big bang 3.

tardisjournal
Characters/Pairings: Ianto Jones, Jack Harkness, Iolo Jones (original character), Andy Davidson, Gwen Cooper; Jack/Ianto
Rating: R
Word Count: 41,300
Warnings/contains: Language; violence; kidnapping and unlawful imprisonment; references to past child abuse
Summary: Ianto Jones has been keeping another secret: he has an identical twin, Iolo, who has been institutionalized since they were eleven. While Torchwood and the city of Cardiff are reeling from Gray's attacks, Iolo escapes, hell-bent on one thing--stealing Ianto's life. When Ianto goes missing, it's up to Jack, Gwen and Andy to figure out what's going on before it's too late.
Spoilers: S1.01--"Everything Changes", S1.04--"Cyberwoman", S1.06--”Countrycide”, S1.08--"They Keep Killing Suzie", S1.13--”End of Days,” S2.09--"Something Borrowed", S2.10, "From Out of the Rain", S2.12--"Fragments", S2.13--”Exit Wounds”
Betas: The eternally patient

dieastra went over this with fine-tooth combs. However, I revise until the 11th hour, so there's stuff they didn't see. Any mistakes are mine.
Cover artist:

chamiletart
Cover art link: Here
A/Ns: I used the the timeline found at

iantos_desktop to determine the dates mentioned in the story. Special thanks to

iantojjackh for the prompt that started it all. Written for the Torchwood Classic Big Bang.

Title: Closer Together and Further Away.
Pairings: Jack/Ianto (past – basically just what we saw in series one.) and Ianto/Owen (briefly) and eventually Jack/Ianto/Owen.
Rating: Older teen (Language, themes and fade out sex scenes)
Word count: 34124
Beta:

star54kar
A/N: A big thank you

czarina_kitty for betaing this for me, to

psithurism for help with Owen's treatment of Jack and to

star54kar for all the great artwork.

Summary: AU from start of series 2. A routine collection of piece debris pulled through the Rift has far reaching consequences for Jack, Ianto and Owen as they find themselves stranded on a distant planet. 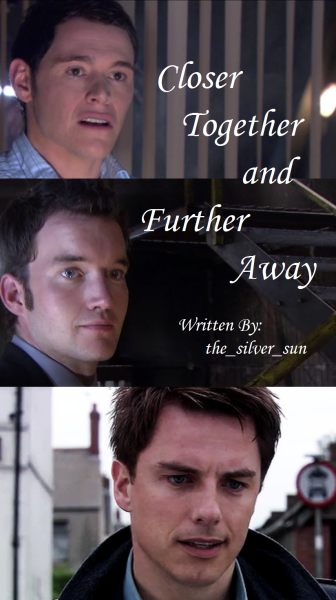 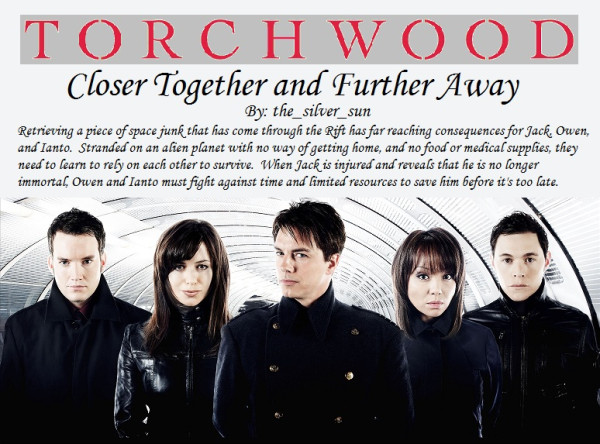 star54kar artwork for this story can be found here

As there are (I think) just the stories to be posted on the amnesty day (7th April) left to post now.

So as there are a few of us posting on the amnesty day to avoid there being a rush of a lot of stories all at once, everybody who has already posted can post their big bang stories out on comms from the 1st of April.

Title: Like Drew Drops On Fairy Wings
Aurthor: backrose_17 oArtist:viviantanner
Fandoms: Torchwood/Harry Potter/Doctor Who
Word Count: 35,725
Pairings/Characters: Jack/Ianto, Sirius/Remus, Snape/Neville, Draco/Harry, Charlie/Tosh, Owen/Tonks, Andy/Hermione, John Hart/George, Fred/Kathy, Blaise/Luna, Oliver/Emily Jones, Estelle, the Doctor/OMC, the Fairies, the Master/OFC, Martha, TARDIS
Summary: Torchwood Three has never been happier with their newfound relationships which are strengthened by the joyous announcement that Ianto and Jack are to have a expecting. But that happiness doesn't last long when an unseen dark force seeks the children for its own nefarious purpose. They get unexpected help in Jack's ex and unexpected guardians from the fairies. What is the prophecy everyone keeps talking about and how are Ianto and his children involved?
Beta: RoyalLadyEmma
Rating: R
Disclaimer: I do not own Torchwood, Harry Potter or Doctor Who but I do own Emily Jones, Kalen, Rhoswen and all other original characters.
Link to Master Fic: DW LJ
Link to Art: Coming Soon

iantojjackh
Characters/Pairings: Ianto, Jack, few OCs, Jack/Ianto (past) Ianto/OFC
Rating: PG
Warnings/contains: not applicable
Summary: Post-Exit Wounds. Ianto needed a break from Torchwood to help himself heal before he could help others. He did not expect the break to become permanent. What happens when he is reminded that there is no escaping Torchwood? Will Ianto choose his old life or keep on the road he's been living? Written for

tw_classic_bb.
Disclaimer: I don't make any money off of this, sadly. All things Torchwood belong to those who own them and the poem The Road Not Taken belongs to Robert Frost. OC's and the plot are mine.
Beta:

With just ten days to go until the first story is posted I thought I'd better make a quick check in post to make sure that all the writers and artists have heard from each other.

If you have let me know. If you haven't also let me know and I'll try to get in contact with either artist or writer, and if necessary find another artist if any have to drop out for any reason.


Edited because for some unknown reason LJ decided to set my mood to angry. I am not, although I'm very fed up with my cold right now.

Still looking for artists for 4 3 stories.

Details and claiming of stories is here: http://tw-classic-bb.livejournal.com/9987.html
Collapse